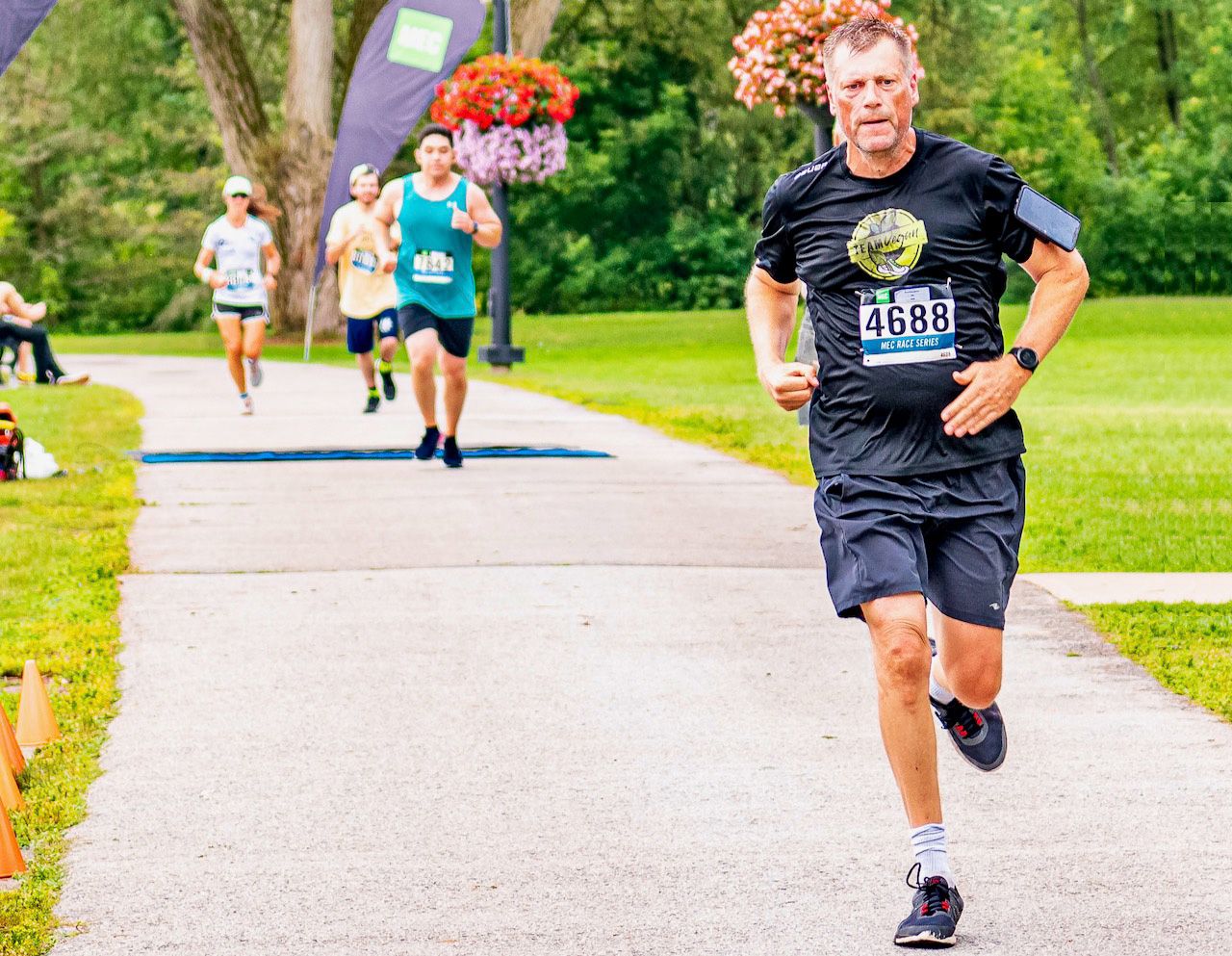 It’s May 15th:  I’ve completed the first 7 races of the year and I’m in a bit of a break, with a month before the next race.

I figure this is a good time to look back at my performance over the first batch runs.  How am I doing, what’s working, what isn’t working, etc.

At least thats the way it started.  Digging into the results brought up something unexpected, and ittook me a little while to put this post together and make a plan for the next part of the year.

I’ve run 6 road races and 1 trail race.  For the purposes of this evaluation I’ll leave the 5 Peaks Kelso Trail Race out, as its a bit of a different animal.

The 6 road races to date are:

My main goal going into this year has been to beat the times that I had set in 2019, before Covid.

Though I had started running in 2018; 2019 is what I would consider my first real year of running.

In 2019 I ran races that included: the Spring run off, a beer run (which sadly I haven’t seen this year), a few 5 Peaks trail races, a few from the MEC series, and the Toronto Waterfront Half Marathon.

I run a lot more now, and expect that I should be able to run faster further, but by how much I don’t know.

That first 5K was great.  I ran at a 5 min pace, and while I know this isn’t going to qualify me for any marathons, its the longest I’ve been able to sustain that pace.

The Spring Run Off was decent too, beating my last time on the course.

The Vancouver Half and the Around the Bay 10K were disappointing, and far off my expectations.  I have some ideas about what happened.

I can’t say I’m not disappointed with the 10Ks though.  Sure, I’m getting faster with each one, but so far none of them have beaten my times from 2019!

Digging into the Numbers

So I actually didn’t realize this until I started to put together this post; it was only when I went back through my 2019 10K times that I found I was running faster back then.  I thought I’d pr’d a few of this year’s 10Ks, but nope!

My Garmin account has the records, but for some reason it didn’t flag them as PRs – I probably did something wrong.

I couldn’t believe it at first so I cross checked with the race chip times (they’re still online) and sure enough, my 10Ks were faster before the pandemic.

What’s Going On with My 10K times?

My times so far this year are 57:26 and 55:45 for the CMCC and Sporting Life 10Ks respectively. Not even including Hamilton as that one was a mess.

A couple of minutes difference, more than enough I think to account for differences in the course – none were particularly hard – and certainly not better, which is what I was expecting.

I’ve spent a bit of time thinking about why my times might be slower now. What is different now vs then, and what I need to do to get the times up to where I want them to be. 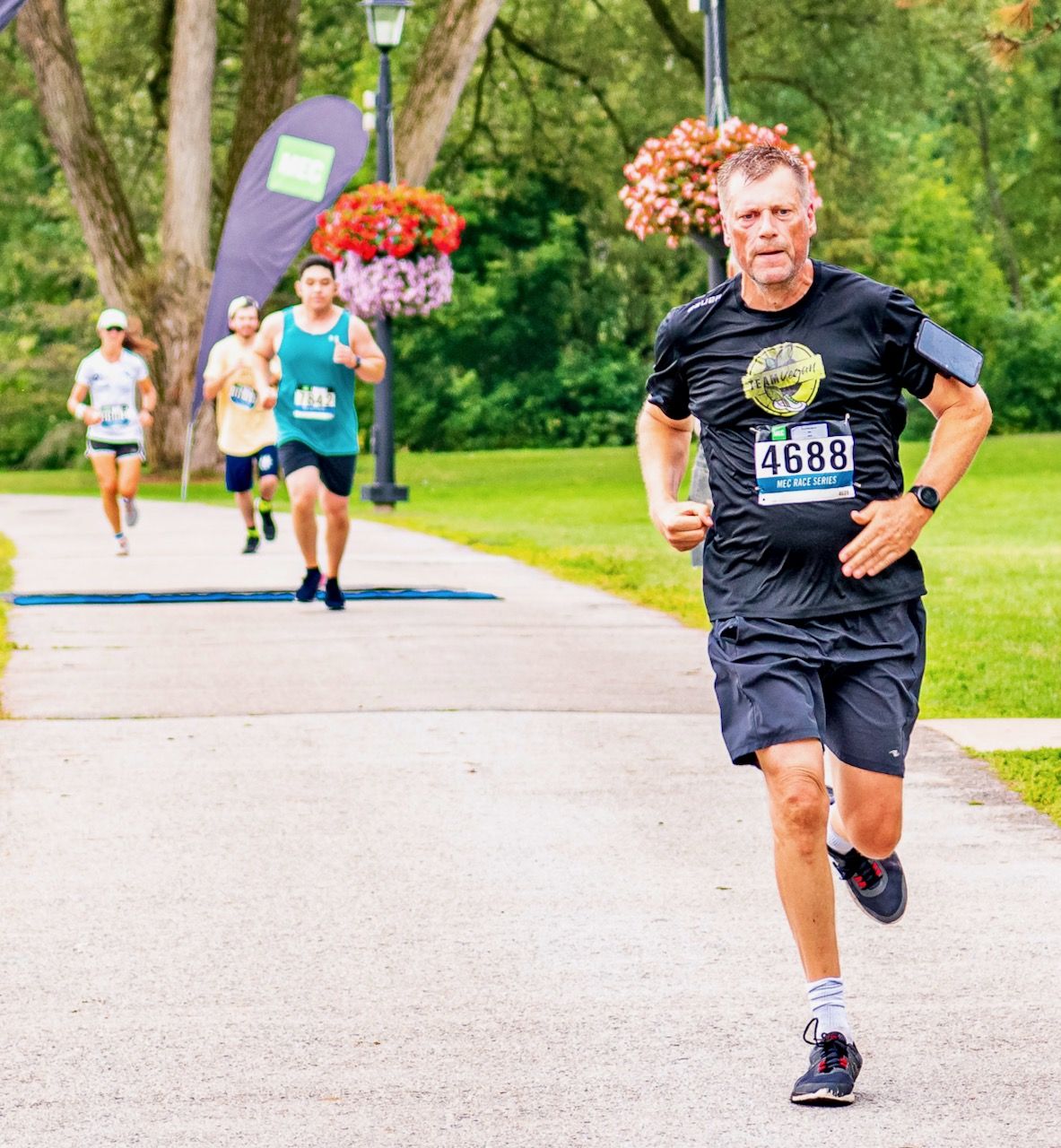 Differences between 2019 and Today

I know I’m getting older, and improvement can be a bit tougher, but surely I have a lot of room to improve.

2019 was an insanely stressful year, work-wise and personally. Running is something I latched on to as it helps to clear my head.

These factors aside, there were things I was doing physically back then, which I have gotten away from, and I think it bears re-evaluating some of them.

I don’t know if this is a factor, but that 2019 PR, and the ones leading up to it were later in the season – in August.

Looking at my running frequency/distance by about the middle of the year in 2019 I was running about as frequently as I am now, though the distance I was running was quite a bit less. 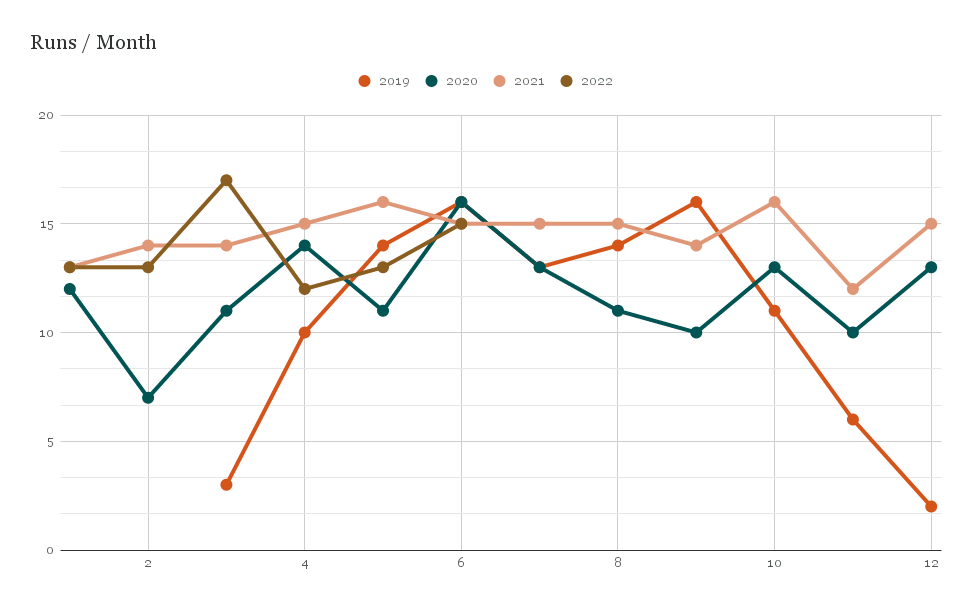 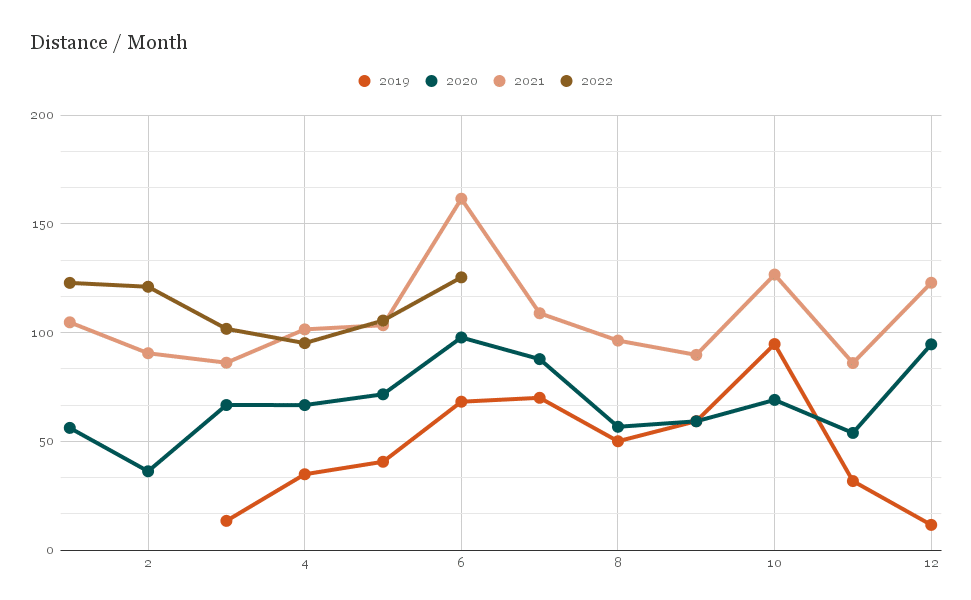 Out of interest, I also pulled my average monthly heart rate for runs from 2019 to 2022.

I kind of expected my heart rate would be dropping over time, but this year its actually been climbing since April. I don’t know if there is anything to that, or its just a factor of more races this year than before.

I know I start to struggle when my hr goes above 160 and stays there – the second 10k of the Vancouver half marathon it was up there the whole time.  It was a real struggle to finish and by the end of the race I was the closest to passing out I’ve ever felt.

Certainly something to keep an eye on. 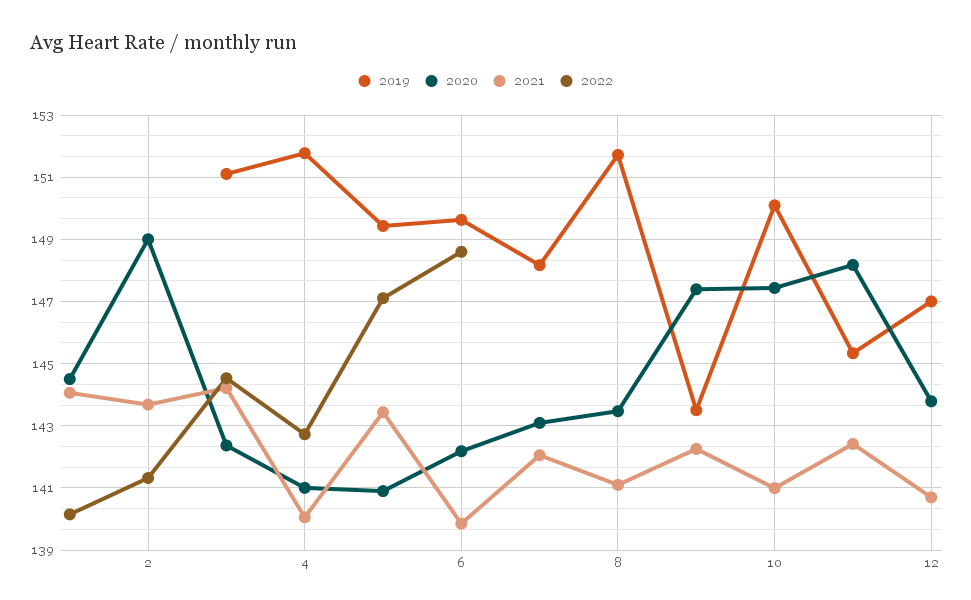 So I think I stopped doing some things that were working for me, and bringing back some of them backwill help me with my goal times.  These being:

In terms of the disappointing Vancouver and Hamilton races, I think they were heavily impacted by two things:  the strong need to go to the washroom during the race, and the waiting around beforehand: Hamilton just because it was a relay, and Vancouver due to the bomb threat. The first is an easy fix, there’s not too much I can do about the waiting, so I’ll need to find a way to deal with it.

Also I want to see what I can do with my heart rate after 10K. Hopefully the 4 items above will help bring it down.

).
It seems obvious, but while running regularly has enabled me to run further and for longer periods, I’ve been hoping it will make me faster overall, and that hasn’t really happened. My “comfortable” pace is around 6min/km, and it hasn’t really changed in a long time.

I’m not sure if that means more speed work, more work at bringing my heart rate down, or what, but it seems this is where my focus should lie.

What Do you Think?

Any suggestions or advice?  What kinds of things have you done to improve your times?